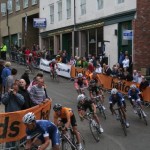 The Pros have been and gone (some to hospital as well). Durham’s traditional streets sorted out the hardcore riders (and bikes to come to that)  from the ten teams. The best corner was at the bottom of the hill turning right into South Street where several riders went into the straw bales more than once and that was when the cobbles were dry ! It was alittle disappointing that there was pre or post race entertainment going around the circuit for the spectators around the course, there was one team car went around a couple of times but that was it.

The Press said that it would attract 3000 spectators on the night, not sure where they were because the top half of the circuit was dead and most went home after half an hour on the bottom half.

It was nice to see so many local riders turn up and watch the action (and give me some stick!) there are some photos in the gallery inc some from Dunny http://picasaweb.google.com/scotbrown1/HalfordsTourSeriesRd2Durham the results and riders interviews are here http://www.tourseries.co.uk/NewsDetail.asp?Id=232