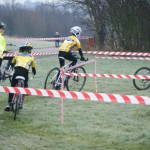 2011/12 Winter Season end. The Season concluded at Hetton Lyons Country Park, followed by the NECCL AGM. Well done to all of our competitors, particularly those who stuck in and completed the necessary minimum five races to qualify as league finishers. The presentation dinner where finishers and winners will receive their prizes and trophies will be arranged for late in February: keep an eye on the website for details. Thanks go to Dave McLean for organising the last event where he devised a cracking course over the varied terrain that Hetton offers, even including an elongated “spiral of death” – perhaps even more challenging and confusing than the basic version. The youngsters races were run off in dry conditions but s shower of rain started the softening process and created a bit of “gravy” on some of the corners for the Seniors. Race action among the Seniors was fast and furious with a group of four battling and exchanging the lead for most of the race until Alan Nixon and Colin Nash pried open some  gaps to finish clear of the chasers, Alan taking the honours. Photos here http://picasaweb.google.com/neccl247 and the results will be in the Results Section asap along with the overall League Tables for Winter 2011/12.

The AGM followed with a number of new organisers and committee members coming forward to carry us into next year. Look out for a few new venues appearing in our provisional calendar which will be published here shortly.