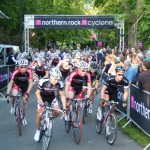 What a weekend of Cycling in the NE. First up was the Crit racing at Leazes Park on Fri night. It stayed dry and was great evening. To start the evening was the two kids races which were running late so had to cut them short but there was still some fantastic battles going on between riders. Next up was the local adults with nearly 70 starting and by a couple of laps the lapped riders were getting pulled out and there was also plenty retirements but again there was a fantastic sprint finish. After that was the Elite’s, they were just too fast ! There seemed to be a lot less spectatrors this year ! photos here – http://picasaweb.google.com/scotbrown1/LeazesCrits 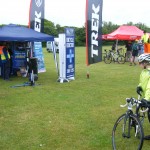 On the Sunday it was the Cycle North East Festival at South Shields. It was a great set up and well organised but the weather was terrible and the event was not advertised but hope it grows in future years . Some photos are here – http://picasaweb.google.com/scotbrown1/CycleNorthEastFestival sorry we have no photos of Nutcracker 3 @ Dalby, just too many events to go to.